For those who do not see the desert as something beautiful, this photo is an undeniably obvious example of how very beautiful it can be. Each landscape and season on Earth has its own beauty. All we have to do is open our eyes and look for it.

Humans have developed “new” flowers in a broad array of “decorative” colors; but God, Himself, developed the original color palette. Without His creation, there would have been nothing for us to work with in our development of hybrid flowering plants. Recognizing that He is the Creator of all things should always be part of our worship experience. Never fail to acknowledge that He is Lord of all creation – the one and only designer of the universe. He is simply God and He is completely beautiful! 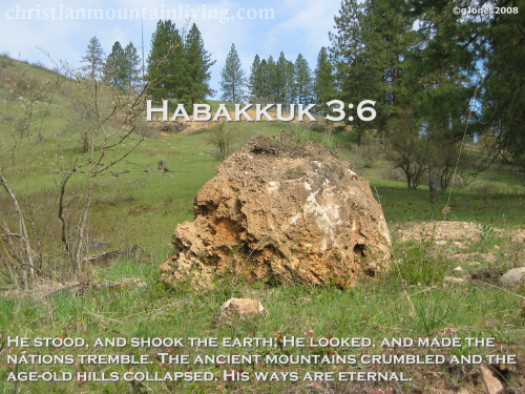 When or how this chunk of ancient rock from far above our house arrived at its current location by our lower road, we do not know. But we can clearly see its original location and are thankful that it did not travel all the way to the highway. As “he” tumbled down the mountain, the rock we call the “hairy rock,” picked up some fertile soil on which grows “hair” during the rainy Spring and early Summer.

Living on the side of a mountain, we have to daily trust that the Lord will guard and protect us – from fast-flowing water during rainstorms, from wildfire, and from tumbling, crumbling rocks. It is far easier to trust Him when you stay close to Him at all times. Make certain you keep your heart and mind close to God, all day every day. Be confident that you can trust Him with every area of your life on this crumbling planet called Earth!

All the earth is groaning, crying for that day of sweet release … James M. Kirk 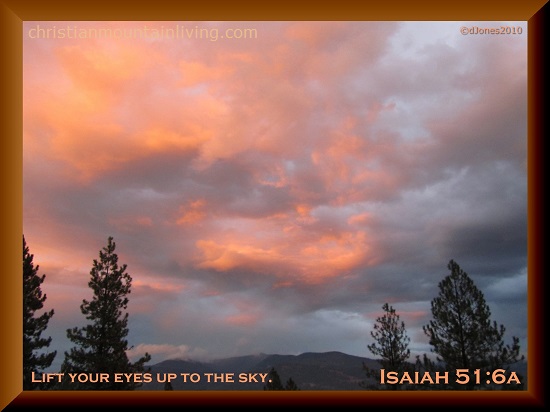 Does this photograph look more like an oil painting than a photo to you? It truly does to me. On rare occasions, the image the camera captures has qualities that suggest it cannot possibly be real. This is one of those photos. It just came out looking like an oil painting, likely from the lighting conditions at the time.

There is nothing “man-made” to compare with what God has created for us to enjoy during our short time here on Earth. We can “manufacture” and “create” and “make” many things, but we cannot produce anything this beautiful on our own. Only God can create such glorious scenes for us to view and appreciate! Thank Him today for creating our world and for creating us with the ability to see and enjoy it – “oil paintings” and all.

sighs are lost in songs of praise … F. G. Burroughs

This fascinating photo my husband took on a warm Summer night reminds me of a scene from a Tim Burton movie. It looks more like a crayon drawing than a digital photograph. You might wonder at my choice to include it in this book; but peculiar as it is, I am genuinely drawn to it. I try to not “argue with God’s leading” as I make my choices for these devotional pages.

“… ‘til the moon is no more.” What a concept. Do you suppose, in the eternity to come, that there will be no moon? If Christ will be the light in that fair land, perhaps there will be no need of a moon. We will not know for sure until we get there! I hope that you are looking forward to Heaven as much as I am. We love our lives here on Planet Earth, but it is comforting to know for sure that this is not all there is! Join me this week in serving Christ as we wait for that day. 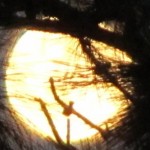 There’s a song within my heart night and day … Mrs. Minnie A. Steele

Throughout any given year, we have literally hundreds of airplane vapor trails, or “contrails,” splitting the sky above our home. As many as there are, they do not often form a cross, and even less often have a sunbeam that forms yet another crossed line in the image that appears. This one just seemed to be particularly “artistic” to me.

The reality of this picture is that two of the lines that appear in the sky physically exist and one of them is a “sunbeam” that has no physical properties at all. It appears almost as genuine as the other two, however. We must be careful to guard against being drawn away by those things in our lives that are not “the real thing.” There is no substitute for the truth, and it is our responsibility, as believers, to be so immersed in God’s Word that we cannot mistake a lie for the truth. When you are challenged this week, seek the truth. 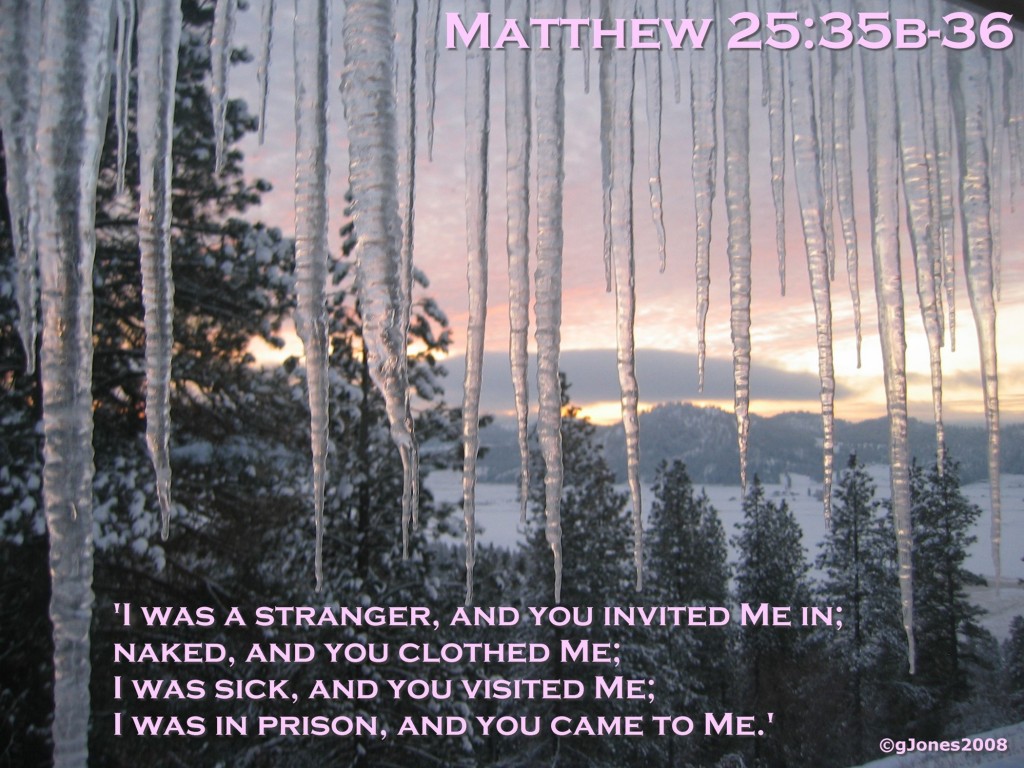 Icicles this size only form once in awhile. We generally do not let them “grow” so long. When the pastel “baby blanket” sunrise reflected in each one of them on this Winter morning, I was very grateful that neither we nor the wind had knocked them down! The frigid “bars on the jail cell” became something truly beautiful and inspiring.

We all build for ourselves prisons of one sort or another, even if we have never been anywhere near a “jail.” We unintentionally limit God’s work in our lives, and we lock ourselves up in our own little worlds and leave Him out of them more often than we should. Have you allowed one or more “prisons” to be created in your life? Take steps today to unlock all of your potential for service to Him and to be all that He would desire for you to be.

…tempted and tried, I need a great Savior … Rev. Elisha A. Hoffman

North of Fairbanks, Alaska, the conditions are often “ripe” for viewing extraordinarily beautiful sunrises and sunsets. My husband snapped this stunning photo while he was driving truck on the Trans-Alaska Pipeline project in the 1970s. Photos like this are often literally “once-in-a-lifetime” opportunities.

We can only imagine what it would have been like to be standing next to God as He created the world we now occupy. Perhaps, when He separated the heavens from the waters on the second day, it looked a little bit like this. Keep your heart and mind open for those once-in-a-lifetime opportunities to fill a divine appointment or to make a difference in the life of someone you know (or don’t know). You may miss “the perfect opportunity” if you are not “standing next to Him”!

Lift up your eyes unto the heav’nly hills … Mrs. C. H. Morris 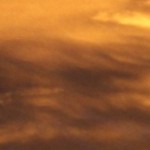 My husband climbed Mt. McKinley in 1977 and took many pictures of this beautiful and majestic mountain through the years. I have seen many “reflection” pictures in my life, but this one is my all-time favorite! The photo clip to the left is actually upside down. If it were not for the color differences, it might be impossible to tell. The shape is identical.

Obviously, what we think we see is not always what we are really observing. Our completely clear sight will come to us only when we reach our final perfection in Heaven. In the meantime, we should continually strive to discern what God has for us to do in this life, as we travel on our journey to the next, however long or short it may be. Commit yourself to live your life this week in a manner that clearly reflects Christ’s presence to others.

… when time with me is disappearing, I want to be alone with God … Rev. Johnson Oatman, Jr.

Glacier ice comes and goes. There was reportedly a 1000’ thick sheet of it covering the valley where we live, sometime long ago. Those of us who live here are unashamedly glad it is all gone. This picture of an iceberg from the glacier at Portage, Alaska does not portray what you would see if you visited there today. Portage Glacier is not at all the same now as it was when my husband took this photo.

Wherever you may travel or live on this Earth, nothing today is exactly the same as it was even 30 or 40 years ago. Age to age, nothing remains the same, except God. Our planet is finite, our bodies are finite. Our cars and our houses and our highways rot and rust and crumble over time. Only God remains the same – from the beginning of time throughout eternity, we can count on His presence and His love in our ever-changing lives and world! 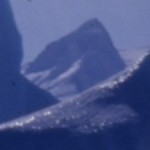 This was such a “gray day” that the color photo almost looks like a “grayscale” image. The scenery is deceptively uncolored. The sun was very close to breaking out of the clouds, but was not quite making it through. This beautiful vista was literally a “landscape in grayscale” in a full-color world.

There are no “gray areas” in the Gospel. The deceiver loves to pull God’s people away from Him with lies and snares and subtle deceptions. We must be diligent to know God’s Word and to use it to illuminate and “clarify” all information we take in, whatever the source. Lord, let there be no “gray areas” in our lives. May we set our hearts and lives on “black and white” and clearly show the world who our God is!

If at times I do not see Him, I will trust and give Him praise … J. E. French

May God richly bless you and yours as you “live” with us in the foothills of the Selkirk Mountain range – no matter where you live on Earth, and whether or not you are currently on a mountaintop – or in a valley – spiritually. This week, read and consider Psalm 91.

You may find our personal blog, Puttin' In Time on the Rockpile - Living Life on Mt. Snowberry - at http://timeontherockpile.wordpress.com