Our home-place fared remarkably well in the recent severe windstorm that wreaked havoc on our region. The following day, we did discover that we had suffered an irreplaceable casualty, though – “the spike tree.”

A fixture on the bench above our home, the spike tree has been the stalwart symbol of bygone years on the timbered hillside above our house and yard the eight years since we cleared a spot and set a foundation.

Likely a remnant of the wildfire that went over our side of the mountain in the 1960s, what may have been a Western Larch (no way to tell for sure, really) was a daily perch for a host of birds – ranging from Mountain Bluebirds to Northern Flickers to Red Tail Hawks to Bald Eagles.

As I searched for photos to document our personal history with the spike tree, I found several. None of them, however, were the ones including eagles. Maybe I will run across those eventually and will add one to this post.

One of our most memorable photo sessions with the spike tree included a man on a hang glider. A trio of hawks was interacting with the glider, and we attempted to catch the encounter in a photo. Unfortunately, trying to “chase” three moving hawks and a circling hang glider in a single still photo with the camera we had at the time proved to be impossible.

Regardless of the season, the spike tree was ornamental in its own unique way. Just a little crooked, it stood out among the trees on the bench because it was the only dead tree in the grouping. Two lightning strikes have changed that in the past year – there are now four dead pine trees in the bench group. Perhaps there will be a successor to the spike tree at some point in the future. Yes, it’s clichѐ, but “time will tell.”

As curious as we were, it was two days before the weather was suitable for us to hike up to see how the snag had come down and where it came to rest. We were pleased to see that it simply lay down on the bank above it – in a similar fashion to other rotting relics in the vicinity.

As we arrived at the site, it was obvious the trunk had twisted as it came down – what was no doubt the North side (all the moss) is now facing East. We never realized how mossy it was – we never viewed it from that side.

In my mind, I supposed that the break would have been in the middle, where it had been obviously compromised over the years. Although the top broke when it came in contact with a native bush on the bank, the trunk is virtually intact. 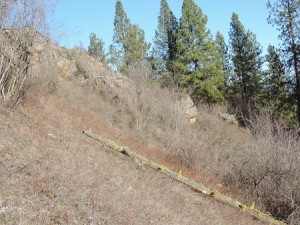 We will miss the spike tree. Scarcely a day went by that we did not look up the mountain for deer or elk – or eagles or hawks – or at clouds or jet streams or the moon – and catch a glimpse of that slim silhouette.

Farewell, Spike – I have to say, I always liked you best in the snow:

May God richly bless you and yours as you “live” with us in the foothills of the Selkirk Mountain range – no matter where you live on Earth, and whether or not you are currently on a mountaintop – or in a valley – spiritually. This week, read and consider Psalm 123:1-2.